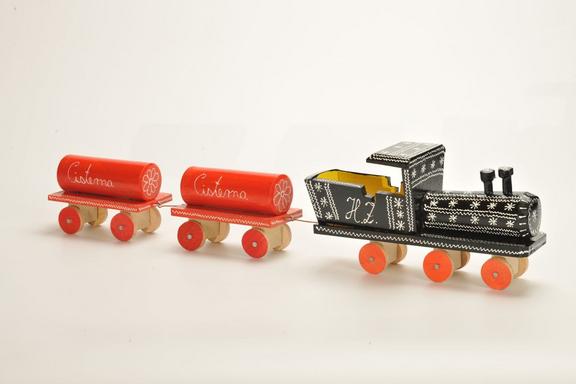 What
Visiting exhibitions
Where
Razstavna hiša
From
TO

Children's toys of Croatia between tradition and modernity

The exhibition titled Croatian Children's Toys - Between Tradition and Modernity was created by Iris Biškupić Bašić, PhD, as a journey through the history of toys made in Croatia by Croatian authors. The first exhibition hall presents toys made by children at the beginning of the 20th century and toys made by adults for their children, which have both been collected by the museum since 1919. A distinct segment is dedicated to toys that were made in toy making centres, where toy production was organised and sales-oriented and employed most of the village’s working population. One of the earliest villages in which organised toy production emerged was Vidovec, near Zagreb. The Vidovec craftsmen employed all kinds of motifs, which were most often centred around the animal world. In the 1950s toy production in Vidovec ceased, never to be renewed.

After the Vidovec segment, the visitors are introduced to another toy making village – Zelovo in Dalmatinska zagora, where wooden toys were produced as an organised venture until the beginning of the 21st century. The toys take on simple shapes, such as horses, butterflies, flutes, and airplanes, and are roughly carved with a knife. Their colours are subdued, painted
in a delicate yellow with soft red and green lines, and they exhibit sparse geometric ornament. Toy production in Zelovo also died out at the start of the 21st century. Upon entrance in the main exhibition hall, the visitors are met with a view of Hrvatsko zagorje. This exhibition hall, as well as the rest of the exhibition, has been designed by the author Nikolina Jelavić Mitrović, whose layout is interesting and visually appealing and succeeds in bringing the visitors, both adults and children, closer to the toys and to the places they were made.

Toy making has a long history in Hrvatsko zagorje, in villages like Stubički and Bistrički Laz, Gornja Stubica, Tugonica, Turnišće, Jerovec, Bedenec, Globočec, and Marija Bistrica. The toys were always made by men and painted by women, and each toy is unique in its own way. The toy-making process has remained the same for generations, and in 2009 the Handicraft of wooden toy making in Hrvatsko zagorje was included on the UNESCO Representative List of the Intangible Cultural Heritage of Humanity, confirming its importance and value on the international level.

The exhibition features big, ten times enlarged copies of children’s toys made in the master workshops of Ivica Mesar from Tugonica and Josip Fijan from Marija Bistrica. These toys can be seen on the Pope John Paul II Square in Marija Bistrica and belong to the collection of oversized toys installed on the square. In this exhibition, the oversized toys will delight the children,
who can sit in them while watching films about the cultural heritage of the Bistrica area. Moreover, the authors have designed a playroom where the children can play with original toys from Zagorje. The exhibition also presents some rare examples of toys made in Croatian factories and master workshops. In Croatia in the mid-1950s a number of toy factories emerged from smaller cooperatives or industrial plants. The most notable examples include the factories Biserka and Uzor in Zagreb, Jugoplastika in Split, 25. maj in Dubrova near Labin, Lanena industrija Osijek, and Krapinska tekstilna industrija with its factory TIK-TIK. All of them were in operation until the 1990s. The exhibition gives special emphasis to toys made at the Biserka factory, which was known for the production of plastic children’s toys made after characters from Walt Disney stories and films. Furthermore, the exhibition presents plush toys made in the master workshop of Ružica Vavra from 1949, of which 150 are copyright protected.

Finally, the timeline brings us to 21st-century toys – not only to those from Hrvatsko zagorje, but also to the very interesting didactic toys created by Croatian designers and artists, which enable children to create their own, new toy from pre-made elements. The museum is in possession of designer toys made by the Croatian artist Goran Lelas, who in 2007 teamed up with
StrangeCo, the famous San Francisco art toy company, and MoMa to carry out his project. Another Croatian product designer, Marko Pavlović, created a didactic toy called Oblo Spheres, which was produced in Canada in 2010, and a toy called Logiq Tower, which was produced in 2015 with investor Mark Cahsens and Great Circle Works Inc. Also on display are the wooden
didactic toy called Cat, designed by the Croatian painter Zlatan Vrkljan and executed by the carpenter and designer Marko Plavčić, and two eco toys made by Damir Adamović from Ivanić Grad.

This exhibition features the most interesting and valuable objects found in the toy collections of the Zagreb Ethnographic Museum. Our wish is to inform the visitors of the Slovene Ethnographic Museum about this part of Croatian heritage, which has too frequently been ignored and marginalised, but which today represents a precious part of our cultural reality.