The Slovene Ethnographic Museum is part of the project Taking Care. Ethnographic and World Cultures Museums as Spaces of Care which explores connections between non-European ethnographic collections and the climate crisis. It highlights indigenous knowledges, values and practices in imagining more sustainable and equitable futures.

Within this project, the Museum will host an art historian Kanika Gupta as an activist-in-residence. In her research, Kanika Gupta illuminates ancient knowledge, that can be traced in Indian museum collections, and shows its relevance for today's global environmental challenges.

Due to the pandemic the residency has just been postponed for the second time. That is why we decided to organize an online pre-programme to share some of the outcomes of our collaboration.

Taking Care: A Conversation with Kanika Gupta
Art historian Kanika Gupta, an activist-in-residence in the Slovene Ethnographic Museum, will speak about her current research and ideas for the residency, which includes her authorial artistic performance as well as documentary film. She will elaborate on her previous collaboration with the Museum which took place in 2018, and present some of the insights into Museum Indian collection. The collection consists of a number of posters made in India in the beginning of the 20th century, and conveys a different set of ideas that will be presented and discussed in this conversation.

In conversation with Tina Palaić, anthropologist and museum curator, a national coordinator for the Taking Care project.

Tuesday, 25 Maj 2021
11:00 CEST; 14:30 IST
Public Lecture: The female and the tree: An ancient Indian motif
Our activist-in-residence Kanika Gupta will be giving a lecture on her ongoing research on one of the most prolific ancient Indian motif, the female and the tree, as seen in the earliest stone sculptures dated to 2nd century BCE to 2nd century CE. Some of these images have been identified as those of the nature deity called Yakshi from the inscriptions on them. However, the identity and the ethos of the cult of yakshi as well as the female with a tree remains unclear. The lecture attempts at tracing ancient Indian myths which mention tree deities and yakshi, in order to comprehend the connections that certain ancient Indian communities were able to make with nature and forests they inhabited. This deity is subjugated and appropriated by all the three surviving ancient cults from India: Jainism, Buddhism and Brahmanism. Why was it significant for these religions to assimilate this deity instead of simply erasing her completely? What do the images and the myths convey?
Ancient realities across the world reveal that a way of life is possible in which human beings live with nature and not against it; history conveys that survival of the human species depends on its  complementing its natural surroundings and not in confronting it. The tree deity is a manifestation of one such reality that once existed and underwent transformation in the hands of its subjugators as the world moved away from its earthly roots. Is there something that the ancient realities can teach us? Perhaps much, only if we are willing to keep our flamboyant technological arrogance aside.
Moderated by Tina Palaić, anthropologist and museum curator, a national coordinator for the Taking Care project.

Tuesday, 1 June 2021
11:00 CEST; 14:30 IST
It was in spring: a Documentary Film by Kanika Gupta
Join us for the Pre-Screening available only for 30 people
We are made to believe that we live in the best times ever witnessed by the human race, and that it is so because we have the best of technologies. But is this true? We live in an age of concrete and cement where fresh air and water are accessible to very few across the globe. Most of us, especially living in urban spaces, consider ourselves privileged, but we live in small spaces, sometimes in extremely high levels of water, air and noise pollution as never possible before.
Recent times have witnessed a sudden surge in construction activities across the globe including skyscrapers, flyovers, appartments and water dams, all made at the cost of forests and sometimes the communities that have lived in these forests for a millenia at least.
Even in built urban spaces, a devastating change is becoming a trend, that of compromising all trees, plantation and garden spaces in exchange for multistorey houses, which don't seem to need a garden anymore. This film is the story of one such house, which is destined to loose all its green cover and make way for cement and concrete. This, unfortunately, is the reality of most urban spaces in India today.
After the film screening, there will be a Q&A session, moderated by Tina Palaić, anthropologist and museum curator, a national coordinator for the Taking Care project.

The number of guests is limited to 30. Please register here: tina.palaic@etno-muzej.si.

BIO Kanika Gupta
Kanika Gupta (b. 1987, New Delhi) is an art historian, a trained dancer and a film maker. She did masters in Art History from the Faculty of Fine Arts, Maharaja Sayajirao University, Baroda, Gujarat and PhD from Jawaharlal Nehru University in Delhi on the ancient Indian motif – the female and the tree. She has authored a book titled Lupadakhe – Unknown Master Sculptors of Ancient India (2019) and has authored several research papers on Ancient Indian sculpture, aesthetics, painting and mythology.
She has worked on several research projects like accessioning and documentation of Ananda Coomaraswamy and Kapila Vatsyayan personal collections for Cultural Archives of Indira Gandhi National Centre for the Arts, Delhi and assisted Professor Deepak Kannal in the content writing for thirty-five modules on ‘History of Indian Sculpture’, for e-pathshala, Online Post Graduate Diploma Course, University Grants Commission, Government of India.
She is a guest faculty at National Institute of Design, Ahmedabad and Kurukshetra and other Universities in India.
Co-funded by the Creative Europe Programme of the European Union. 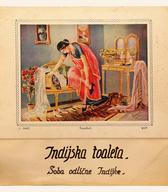